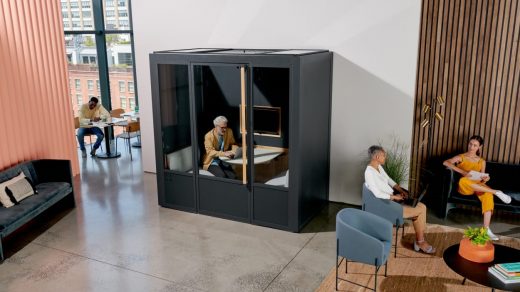 We’ve been living in Zoom coffins this year

Before the pandemic, an estimated 70% of U.S. companies worked out of open plan offices. Their employees, by and large, hated them. With few, if any, walls separating them, workers were constantly distracted by each other’s noise. And when there was a need to get away from that bustle, for a private phone call, a small meeting, or just to quietly sit and do some focused work, the open plan office did not provide many options.

In 2018, a startup called Room stepped into this void with a suite of cleanly designed stand-alone privacy booths aimed directly at noisy offices. They were small, compact spaces with room for someone to stand and take a call and write notes, or even sit at a small desk, and blissfully shut the door behind them. Tiny realms of privacy turned out to be a hit in offices around the country. By year two, the company was doing $30 million in sales, according to cofounder Morten Meisner-Jensen. “And then we hit COVID in February 2020 and things looked very different,” he says.

White collar workers abandoned offices in droves. It would seem to be an existential problem for a company like Room. But soon enough, offices began coming out of dormancy and into a new reality: Instead of open plan offices full of noisy people, they were sprinkled with noisy Zoom and Teams video meetings.

Call it office noise 2.0. “There’s almost always a digital component to every meeting now,” Meisner-Jensen says, and that means a new source of aural distraction for workers. Privacy booths are suddenly even more relevant. The spaces on offer vary widely, from Room’s high-end, design-focused booths to privacy capsules that can feel a bit like stepping into an upturned coffin. Meisner-Jensen says Room has sold about 28,000 of its privacy booths, with prices ranging from $5,995 up to $19,995, and demand is growing.

Room is not alone. Many office furniture companies have also started building their own privacy booths, including companies like TalkBox, KI, and Buzzispace. The 2022 edition of NeoCon, a major commercial interior design convention, was flooded with them. “Everybody had a booth. It was like a phone booth conference,” says Andrew Flynn, TalkBox’s COO. “The market that is out there for these things is only growing.”

TalkBox is a Boulder, Colorado, company that has been building slim phone booths and meeting rooms since 2015. Flynn says the company was founded to address the noise and lack of privacy in the typical office, but realized during the pandemic that the company’s products could be part of a reinvention of office work. “We went from being a product that people needed to a product that people wanted to be able to give their employees as a value-add when they came into the office,” he says.

To be considered a workplace amenity, Flynn says these spaces have to be more than utilitarian Zoom coffins. Design plays a critical role in making booths both usable and desirable. TalkBox’s booths start at $4,245 and prioritize the user experience, with frosted glass doors and walls that give users privacy.

“You can spend a whole lot of money on a booth that has nothing but glass and stainless steel and looks like a really beautiful piece of furniture. And then you get in it and you realize you’re on display in front of the whole office,” Flynn says. “You’re in a little display case, and everybody can see what you’re working on.”

Flynn says TalkBox has sold its booths to customers in all 50 states and more than 30 countries. Unlike many of its competitors, TalkBox also uses sliding doors, cutting down the space its booths require inside offices. “Your external footprint is reduced by almost half,” Flynn says. “This can be tucked into a lot of different places.”

Room’s offerings tend towards the more designed end of the privacy booth spectrum, with pale woods on their interiors, dimmable lighting integrated into their wall seams, sound absorbing material made from recycled plastic bottles covering most surfaces, and skylights to counter Zoom coffin-claustrophobia. In its larger booths, Room’s booths have screens embedded in the wall for video meetings, and a video stitching software can make it look on a video call like people sitting across from each other in the booth are actually side-by-side.

“Companies need to create engaging experiences that people want,” Meisner-Jensen says. “Businesses are competing against people’s couches and coffeeshops and other spaces.”

The booths are also modular, meaning they can be assembled on site and expanded or adapted as needed, including into conference rooms capable of holding up to 18 people. “You can build something that works well for a tenant or a company on day one, and then you can reconfigure 200 days down the line or 500 days down the line or three years down the line, rather than tearing down walls and building up new ones,” Meisner-Jensen says.

Though Room is technically a company that builds phone booths, Meisner-Jensen says the intention is much grander. He calls Room a modular architecture company, targeting the waste that’s generated by companies moving into new offices and renovating their interiors to meet their own needs. And with the pandemic leading many companies to seek out more flexible alternatives to the traditional five- or ten-year commercial office lease, he believes more companies will be looking for simpler, less wasteful ways to turn offices into useful spaces.

“A building can last for hundreds of years, but interior architecture normally gets demolished and rebuilt between every single tenant, and that’s really the market where we’re interested in coming with a better, more sustainable alternative,” he says.

Whether it’s a claustrophobic coffin or a high-end skylit meeting pod, the private office booth seems likely to be a part of the officescape for the foreseeable future. 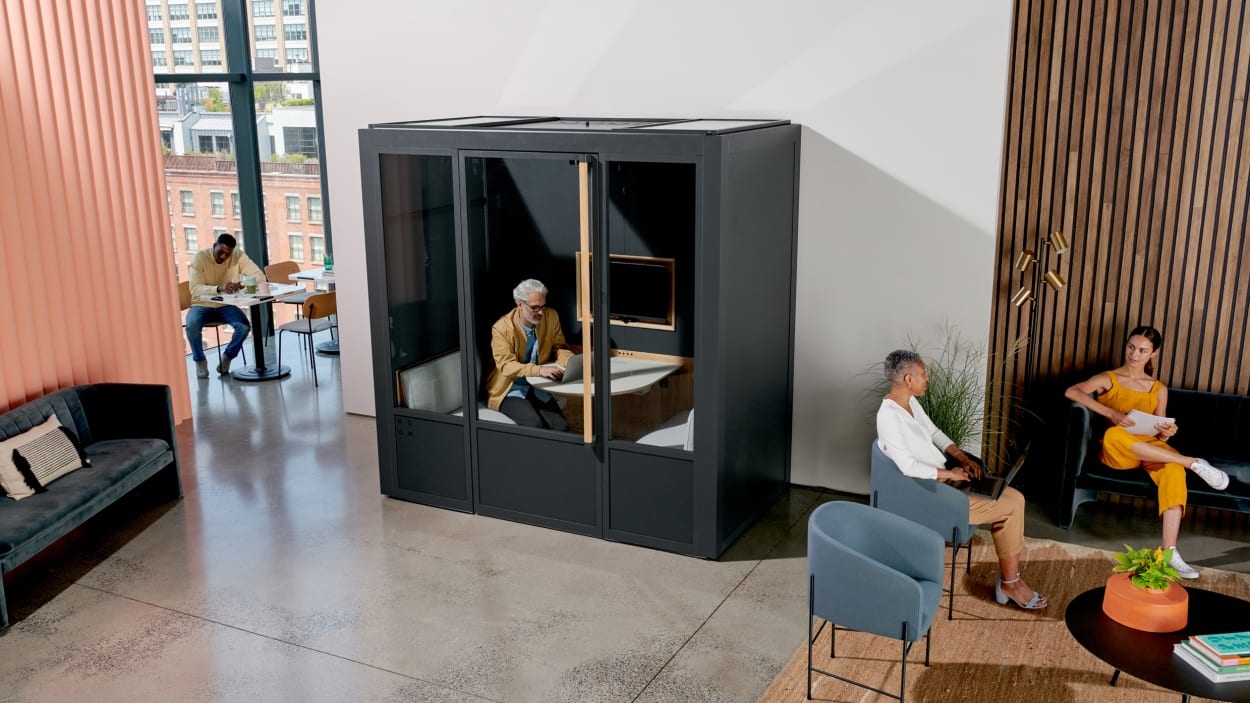