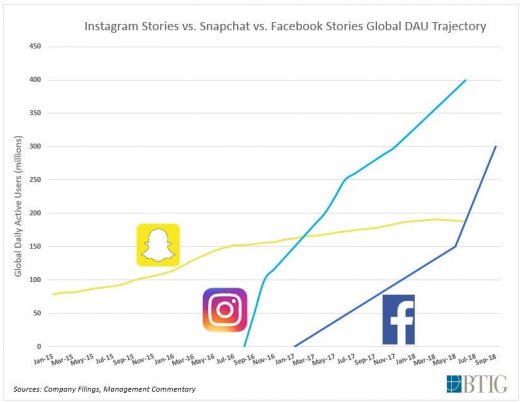 What Does Facebook’s Earnings Call Tell Us About Their Strategy?

For a moment there, Facebook was untouchable. For quite a few ‘moments’ actually. The social media heavyweight hit a billion users in 2012, and would go on to better those numbers, and the resulting revenues, in the years to follow.

By diversifying their strategy, and growing the family of applications in the Facebook stable, the organisation’s offerings enjoy more than double this user figure today. Numbers from the final quarter of 2018 show a record 2.3 billion users worldwide.

But, once again, Facebook’s latest earnings call has exposed cracks in this otherwise impervious facade. Facebook is no stranger to this negative chain of events – on at least four occasions, Facebook stock has taken a major hit following a quarterly earnings call – but this time is a little different, and the immediate implications are less clear. So what exactly is going on, and what does this mean for Facebook’s – and your – core strategies?

One of the key takeaways from the earnings call is the huge increase in revenue for Facebook across the entire financial year, leading to a marked increase for the company’s stock prices at the beginning of the new year. Facebook’s revenue grew by 37% year on year; a surge which was powered in the most part by advertising gains.

The average price per ad actually fell in the fourth quarter of 2018, dipping by 2%, while ad impressions surged by 34%.

Does this mean that now is the time to bolster your Facebook ad strategies with increased investment in the platform? Well, perhaps not, and this brings us to one of the more confusing aspects of the earnings call – the increasing homogenisation of Facebook’s digital properties.

While Facebook’s ad revenue and impressions certainly did grow in Q4 of last year, much of this growth is down to platforms such as Instagram. Last year, there was significant anxiety around the news that Facebook may be reaching a tipping point in terms of its ad load, so it would make sense for Facebook to expand its digital advertising real estate with increased focus on other platforms.

It is also becoming difficult to ascertain what proportion of Facebook’s active users are utilising which platforms. It is well documented that Instagram’s popularity continues to grow exponentially, and, as Facebook is now opting to report aggregate numbers of users across its whole family of apps rather than publicising individual platform data, this is another key indicator of a shift in focus for the company. Further evidence for this pivot is found in the news that Facebook plans to unify and centralise some of its most popular apps’ messaging, including Instagram and Whatsapp, in future. Facebook was untouchable by itself – now, the pioneering platform has called upon its mates to lend a hand.

Instagram is now Facebook’s most attractive application for users and advertisers alike. While the original Facebook platform still leads the way across all age demographics for penetration (albeit not engagement), Instagram continues to gain among younger users, and with Generation X-ers. In fact, Instagram is still leaving its main competitors – such as the ever-popular Snapchat – in the dust, underlining the significant market share still enjoyed by the Facebook digital family.

This chart on the growth of stories across each platform says all you need: 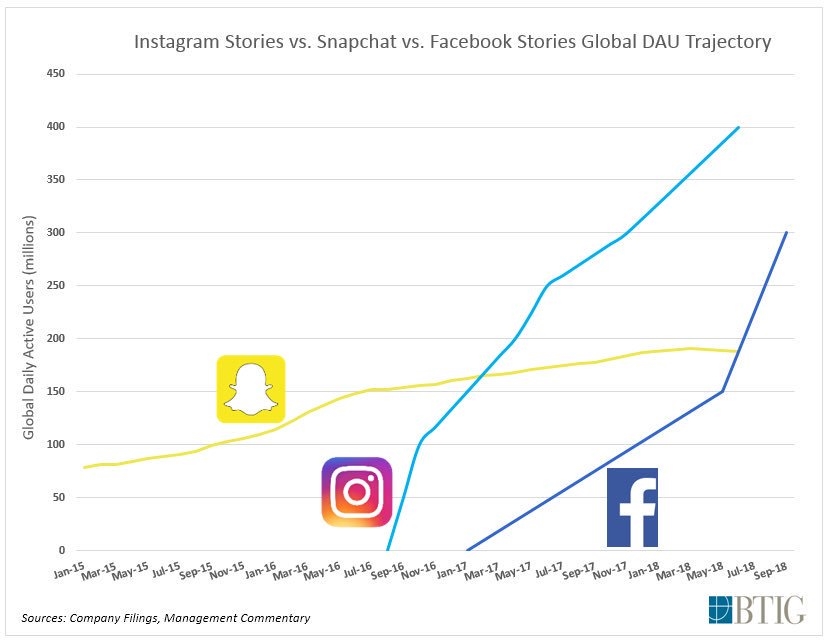 The last 12 months have been tough for Facebook, both from a business point of view and from an ideological one. Facebook has always positioned itself as a transparent, no-nonsense social media network, designed to bring people together and to facilitate the free flow of ideas.

However, the Cambridge Analytica scandal highlighted a far darker, and far less scrupulous side to the platform – a side to which personal data was a commodity, and was available for sale if the price was right. This was not the only scandal to hit Facebook, as questions surrounding data security and the use of the platform for nefarious purposes, were repeatedly raised. The public perception of Facebook hit rock bottom, and this was reflected in huge losses for the company and its shareholders.

However, despite all of this, Facebook has rallied, and users have voted with their feet by staying put and continuing to utilise the platform and its associated apps on a daily basis, rather than leaving in protest. This, as we have seen, has been reflected both in revenue gains and in share price increases – something which is undoubtedly encouraging as we plan our social media strategies over the coming 12 to 18 months.

But questions still remain unanswered: Why, if advertising revenue on the platform is seemingly going from strength to strength, is Facebook unwilling to release standalone user data? Why do they insist instead on aggregating user data across the whole family of platforms? And why does the company seem so keen to centralise its key assets in one, unified platform?

This uncertainty demonstrates how important a diverse and agile social media strategy is in 2019 and beyond. When the clear favourite starts to stumble, it is time to hedge your bets.