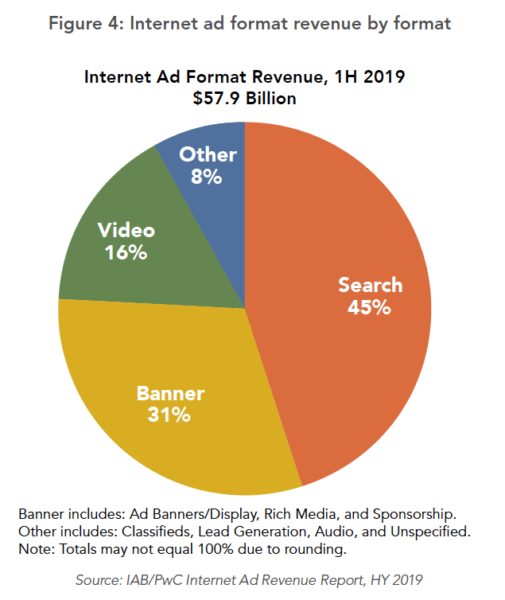 What’s Digital Commerce Advertising and what tools can help?

A convergence of phenomena in interactive advertising and retail are contributing to growth in this category.

Digital advertising spending has been on a strong growth trajectory since its inception. The Interactive Advertising Bureau’s report on the first half of 2019 had revenue totaling $57.9 billion, which represented a 16.9% increase from the same period in 2018. But in the numbers was one important sign of maturity of the industry. It’s the first time that revenues for the first half of a year were lower (by $30 million) than the second half of the previous year.

Advertising expenditure in general tends to be bigger in the second half of the year, as retailers push holiday deals for the consumer gift-giving season, so it’s a testament to interactive advertising’s enduring value that digital has so far bucked that trend by showing first-half results that exceed the previous year’s second-half. Still, it indicates that things are beginning to settle down into the usual seasonal patterns and advertisers looking for undervalued inventory must seek it outside of the more established channels.

At the same time, digital technologies have created immense disruption in the retail industry in the past decade, leading savvy retailers, as well as direct-to-consumer companies, to innovate. It’s not just about bricks-and-mortar stores versus online shopping any longer, as we’ve come to understand that each has its own strengths. Instead, success rests on companies’ ability to find the right mix that serves customers most effectively.

“Convergence in retail, competition, and the continued blending of physical and digital operations are driving businesses to find new ways to create value for consumers and stakeholders, while capturing value for themselves and investors,” write the authors of Deloitte’s recent report on the changing retail industry. “We’ve witnessed a proliferation of new business and profit models focused on enabling consumer choice and fulfilling demand.”

The rise of digital commerce advertising: what it is and why it is valuable

It’s in this environment that we’re seeing the development and growth of what we call digital commerce advertising. One digital manifestation of this, marketplace advertising, resembles what, in the traditional world, is called point-of-purchase marketing or shopper marketing. This area, and the tools that allow advertisers to scale their campaigns, are what we explore in our Martech Intelligence Report on the topic.

This largely takes the shape of keyword-targeted auction-based pay-per-engagement product ads that appear on e-commerce sites’ search results, category and product pages — with Amazon being the biggest player and Walmart emerging. Additionally, there are shopper marketing networks that promote products sold on retailer sites. Often, microsites and branded landing pages are also available, though not always through self-service interfaces.

Channels that allow marketers to upload and advertise from a product feed — Google Shopping, Instagram, Facebook, Pinterest and Snapchat — also represent a type of digital commerce advertising, but they’re beyond the scope of what we cover in our report.

Like search advertising, which the IAB reports commanded 45% ($26 billion) of the overall digital advertising pie in the first half of 2019, digital commerce advertising is intent-driven. It uses behavioral data like keywords searched and product pages visited, in conjunction with an auction-based bidding marketplace, to determine what ad should be served to a particular individual at a given time. Even better from the marketers’ perspective, digital commerce advertising is about as bottom-of-the-funnel as it gets — appearing just as shoppers are ready to buy, filling their virtual carts and checking out.

Pamela Parker is Research Director at Third Door Media’s Content Studio, where she produces Martech Intelligence Reports and other in-depth content for digital marketers in conjunction with Search Engine Land, Marketing Land, MarTech Today and Digital Marketing Depot. Prior to taking on this role at TDM, she served as Content Manager, Senior Editor and Executive Features Editor. Parker is a well-respected authority on digital marketing, having reported and written on the subject since its beginning. She’s a former managing editor of ClickZ and has also worked on the business side helping independent publishers monetize their sites at Federated Media Publishing. Parker earned a master’s degree in journalism from Columbia University.