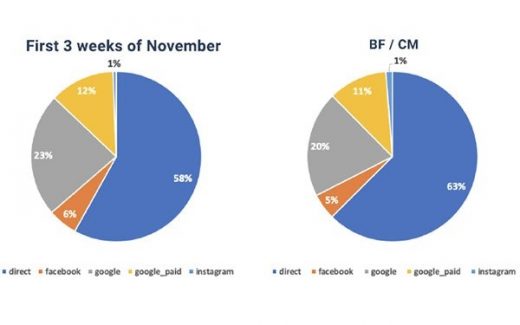 Why Email, Website Visits Drove 58% Of Traffic To Online Retailers The First 3 Weeks Of November

Why Email, Website Visits Drove 58% Of Traffic To Online Retailers The First 3 Weeks Of November 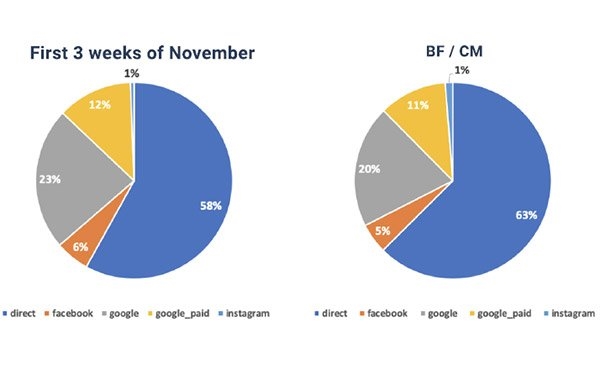 The data covers various marketing channels from Facebook and Instagram, to Google paid and organic search. The data was pulled between Nov. 1 and Dec. 2, 2019.

Fifty-eight percent of traffic to online retailers during the first three weeks of November 2019 came from direct marketing such as email and website visits. Google Organic Search contributed 23%, with Google Search Ads at 12%, Facebook at 6%, and Instagram at 1%.

The study also revealed that traffic to online stores increased 2.5 times on Black Friday and Cyber Monday, but the traffic sources remained about the same.

Instagram’s conversion rate for Black Friday and Cyber Monday more than doubled — with 0.28% versus 0.57%, respectively — but the company along with its parent Facebook had very low conversation rates.

Visitors from Facebook and Instagram typically arrive on sites from ads on with much lower intent. More often than not site visitors arrive from a general post or ads that target a wide audience.

Perhaps retailers and manufacturers don’t need the holidays to pull in sales from online.

Similar to other studies suggesting a boost for mobile transactions, Oribi’s study found that 60% of online consumers used their mobile phones to make purchases on Black Friday and Cyber Monday — up 5% compared with an average retail day.

Earlier this year, Oribi closed a funding round, $7 million, led by Israel-based S Capital LP, with the participation of existing investors Sequoia Capital and TLV Partners.