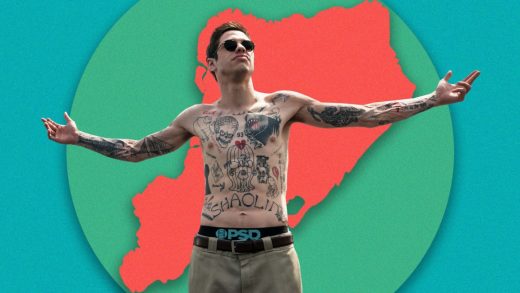 It’s no accident that the very first shot of The King of Staten Island is Pete Davidson as seen through a rearview mirror.

The Judd Apatow-directed dramedy, which hits VOD today, is Davidson’s earnest effort to make peace with his own past.

“To be honest, seeing it on screen feels really releasing,” the SNL star and tabloid fixture told the Washington Post recently. “Like, maybe, I could put this part of my life behind me and move forward.”

For Davidson, moving forward evidently involves cleaning out his entire closet, in full view of the public. At an unapologetically Apatovian two hours and 16 minutes, the semiautobiographical film unpacks its subject’s history, psychology, and self-analysis in spectacularly unflattering fashion. It reveals way more about Davidson than the comic’s candid, confessional recent Netflix special could, perhaps more than casual fans even want. You may not like Pete Davidson more after seeing this movie, but dammit, you will understand him.

Here’s what most people already know about Pete Davidson. He landed on Saturday Night Live at age 19, the youngest cast member since Eddie Murphy, after just three years of performing as a stand-up. (To put this achievement in perspective, it’s ordinarily a huge deal for a fledgling comic to book a single Colbert set in their first three years.) After making a splash with SNL desk pieces, and popping up in movies like Trainwreck and Set It Up, Davidson became a pop culture curiosity with his whirlwind engagement to Ariana Grande, which ended as quickly as it began. Although he has accrued a respectable if modest body of work in a relatively short period, the comic’s career has often been overshadowed by his personal life. Aside from his relationship with Grande and a blur of other famous brunettes in her wake, Davidson openly displays his struggles with addiction and mental health issues, and the unhealed wound of a firefighter father who died on 9/11.

In the movie version of Davidson’s life, the two main differences are that his career hasn’t taken off yet at age 24, and that he aspires to be a visual artist instead of a stand-up comedian. A lot of the rest is very much the same, right down to the Crohn’s Disease. Just as in real life, his character, Scott Carlin, still lives at home on Staten Island with his mother, Margie (Marisa Tomei), the nurse widow of a firefighter. Drugs, mental health, and an infinite scroll of tattoos: they’re all present and accounted for, too. The central conflict of the movie, though, stems from Margie starting to date Ray (Bill Burr), another firefighter, which forces Scott to confront the reality of his arrested development. In cowriting the screenplay for The King of Staten Island with Apatow, Davidson clearly had to do a lot of similar confronting himself.

That opening rearview mirror shot of Davidson takes place just before his character closes his eyes while driving on the highway, playing a one-sided game of chicken. It’s something the comic actually used to do as a teenager, just before his career took off. In the movie, as in real life, Scott ultimately loses the game, chickening out at the last second and maneuvering to (barely) avoid causing a fiery crash.

Davidson has had public suicide scares in the past, so it shouldn’t be much of a surprise to see a character based on him voluntarily flirt with death. What is revealing, however, is what happens right afterward. We see behind Scott, through the back window, the consequences of his actions: two cars colliding hard enough to pop off a hubcap. Scott keeps driving, frantically, saying “I’m sorry” to no one as he puts his seatbelt back on. He feels bad for almost killing some people, and actually causing a mild fender bender, but it’s just a drop in the bucket compared to how sorry he feels for himself.

Any sympathy viewers might have for whatever he’s going through should be negated by his recklessness and selfishness. It’s commendable that Davidson recognizes as much about his past self, and avoids romanticizing his instability. Instead, at every turn, he shows us the festering scab of his former self, rather than the camouflaging Band-Aid.

“There’s something wrong with me, like, mentally,” Scott says, a couple minutes later, to the friend he’s secretly dating, to explain why he doesn’t want to be in a relationship with her. “I’m not okay up there. I get all manic and crazy and make really insane, impulsive decisions. And I’m scared of myself, and I don’t want to scare you or me or hurt anyone.”

Viewers again might be tempted to have sympathy for Scott, because he is clearly not well, but the fact that he uses his mental health problems to get no-strings sex is manipulative and gross. It’s far from the only manipulative, gross thing Scott does either. This moment sets up Scott’s most glaring flaw: he has several legitimate grievances, and uses them alternately as a shield, a crutch, and a weapon.

Chief among the grievances Scott relies on is the death of his father.

Throughout most of the movie, Scott takes every possible opportunity to bring him up. In real life, Davidson has joked on stage about his father, whose death clearly had a profound impact on him. Scott, on the other hand, trades on people’s compassion for his loss so much, you want to grab him by the collar of whatever ridiculous shirt he’s wearing and tell him that terrible things happen to other people all the time, too. It doesn’t seem like Davidson’s intention is to work through Scott to tug on the audience’s heartstrings, but rather to take himself to the woodshed over his past private conduct.

“You don’t get to act crazy your whole life because Dad died,” Scott’s sister, Claire (Maude Apatow), tells him at one point.

The fact that other characters try to break Scott out of his solipsism suggests that Davidson has already done a lot of work on himself and channeled it into this movie.

The King of Staten Island begins and ends with songs by Kid Cudi, Pete Davidson’s favorite musician. Kid Cudi is another person who has publicly dealt with substance abuse and mental health issues, and laced those experiences into his work—something Davidson admires about him.

“It’s comforting to know your hero goes through the same stuff you do,” Davidson said in an interview with Vulture years ago.

By being so transparent about his own flaws in addition to his struggles, Davidson is now offering the same comfort to anyone who now sees him that way. 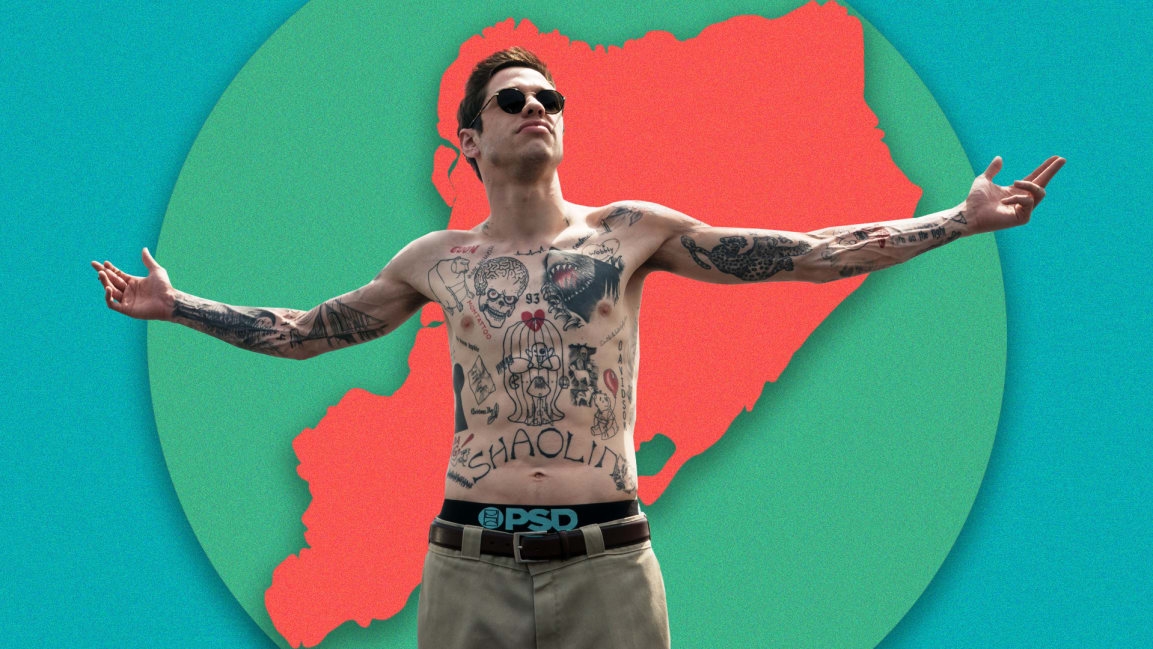