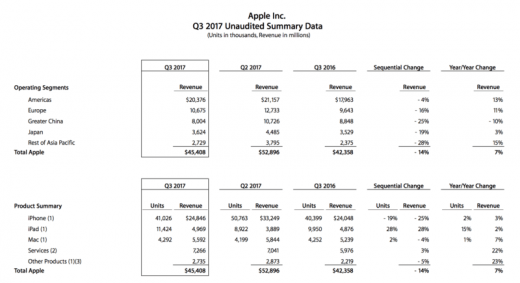 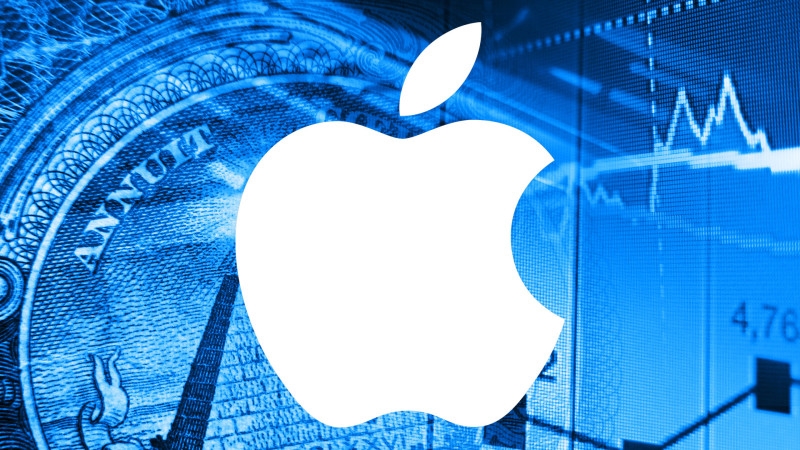 This afternoon Apple reported quarterly revenues of $45.4 billion, which beat Wall Street expectations. Earnings per share also beat expectations by $0.10. Revenues were up 7 percent year-over-year, while earnings were up 17 percent.

Most significantly for investors, the company offered higher-than-expected guidance ($49 – $52 billion) for the fourth quarter, anticipating the release of the new iPhone. 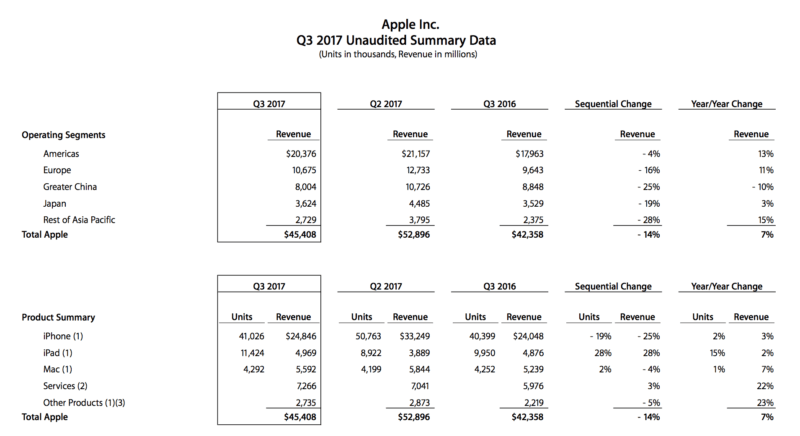 Apple said it saw growth in every product category. Mac, iPad and Sales of Apple Watch were up, the latter over 50 percent. The company also said that demand for AirPod earphones continues to exceed supply, getting 98 percent customer satisfaction scores according to third party surveys.

Apple CEO Tim Cook said that the release of iOS 11, will make iOS the largest augmented reality platform in the world. It also claimed that the App Store generated 2X the revenue of Google Play. The company also said that “three out of four Apple Play transactions happen outside the US.”

Apple said it has now more than $260 billion in cash and short term investments. Investors reacted positively to the news, sending the company’s shares up in after-hours trading.

This year is the 10-year anniversary of the introduction of the iPhone, which together with Android changed digital marketing forever — Facebook recently reported that nearly 90 percent of its ad revenues were mobile — though many marketers were slow to recognize its impact. Indeed, many marketers are still adapting to a mobile-first consumer audience.

Excerpts from the Q&A on the earnings call:

Cook addressed the VPN controversy in China (removing “unlicensed” VPN apps). “We would obviously like not to remove the apps,” said Cook but he added that Apple needed to comply with the law in China.

Cook said it’s making a big investment in “autonomy,” and “autonomous systems,” which can be “used in a variety of ways; vehicles are only one.”

Regarding AR Kit (augmented reality): Cook says that he thinks AR is “big, profound” and sees a variety of enterprise, consumer and small business applications. He said that Apple developers are embracing it.

Services revenue is growing principally because App Store growth. Apple said it’s making it easier for consumers to pay around the world. In addition, the “quality and quantity of content continues to improve.” Apple Music is also growing very fast as is iCloud storage.

CEO Tim Cook said he was “bullish and optimistic about India” and that he saw the market as a significant growth opportunity for the company, like China a few years ago.