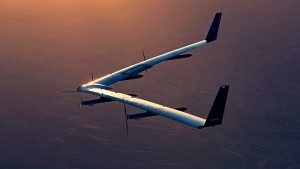 And on the second flight, there was no crash.

On May 22, Facebook put its Aquila drone–a Boeing 737-sized autonomous aircraft that weighs about the same as a car and is meant to deliver internet connectivity to underserved areas–in the air for the second time. For nearly two hours, the giant flying wing soared over Arizona before finally returning safely to the ground just after dawn.

Facebook first unveiled the Aquila program in 2015, promising to deliver Internet at 10 gigabits per second to parts of the world that have no existing broadband infrastructure. It was meant to be a part of the tech giant’s Internet.org initiative, which aims to bring low-cost internet connectivity to millions of people around the world who have little or no access to it today.

Aquila’s first flight took place on June 28, 2016, and in the days afterward, the narrative was that the test had been a success. But buried deep in a long blog post about the flight was the revelation that, in fact, something had gone wrong–Aquila had broken apart after a very hard landing. News about the crash emerged months later when it was revealed that the National Transportation Safety Board was investigating what had happened.

Now, with reports of Aquila’s second flight today, Facebook made a point of noting, up front, that the drone had landed successfully. “The aircraft flew for 1 hour and 46 minutes,” Martin Luis Gomez wrote in a post on the flight, “and landed perfectly on our prepared landing site.”

It’s no, ahem, accident that word of the aircraft making it back to the ground in one piece is in the first paragraph of Gomez’s post, given the backlash against how Facebook placed the description of the accident last summer way down in that post about the first flight. Afterwards, the company said it had been unable to say much more, given the NTSB’s inquiry.

In the post, Gomez noted that the Aquila team incorporated a number of lessons learned from that first flight, making numerous modifications to the drone before sending it airborne again.

Among them were the addition of spoilers on Aquila’s wings that were meant to “increase drag and reduce lift during the landing approach.” This was clearly a design intended to avoid a second crash landing, which Facebook said last year had been due in part to the aircraft going too fast as it approached the ground.

In addition, the team added a “horizontal propeller stopping mechanism to support a successful landing,” as well as hundreds of new data-gathering sensors, modifications to the onboard autopilot software, new radios for Aquila’s communication subsystem, and more.

Not long after takeoff,  Gomez wrote, there was just one surprise, and a “happy” one at that: “The climb rate–at 180 [feet per minute] was nearly twice as fast as on our first flight.” That was apparently due to some of the improvements on the new Aquila, most notably a smoother finish that had been incorporated prior to the test.

The purpose of the second flight–beyond making returning Aquila to Earth in one piece–was the collection of mountains of data. “We flew lengthy test points at constant speed,” Gomez wrote, “heading, and altitude to measure the airplane’s drag. The data from these ‘trim shots,’ as they’re called, will be used to refine our aerodynamic models, which help us predict the energy usage and thus optimize for battery and solar array size.”

One of Aquila’s interesting design elements is that it doesn’t have traditional landing gear. This no doubt contributed to the damage it experienced during last June’s flight. But the design, in which the plane “lands on Kevlar pads bonded to the bottom of the motor pods,” was aimed at reducing the aircraft’s weight and drag.” Still, that design means that Aquila must land almost perfectly in order not to break up upon hitting the ground too hard.

So it was no small deal when the plane began its landing approach on May 22. First, the autopilot shut down the propellers so that they would lock in a horizontal position, ensuring they wouldn’t be damaged upon touchdown. Unfortunately, Gomez wrote, only one of them locked in the proper position.

Still, Aquila came down “very gently” on the gravel landing pad, and stopped completely after about 10 meters. “It was absolutely perfect,” Gomez wrote, before adding that, “similar to driving a car on a gravel surface, landing a plane on gravel causes a few minor, easily repairable dings, but otherwise, Aquila landed in great shape.”

And on the second flight, there was no crash.