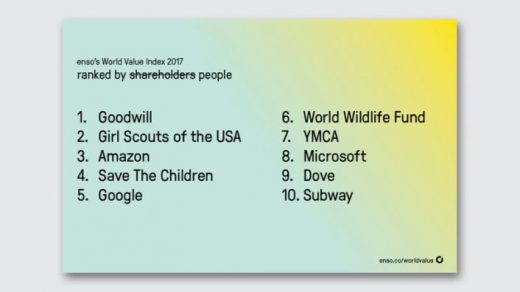 In January, when Starbucks announced a plan to hire 10,000 refugees over five years, it may have hoped to gild its reputation for doing good. But, if so, it was in for a rude surprise. By mid-February, its brand perception score had fallen by two-thirds, according to one ranking.

Apparently many consumers were influenced by a #BoycottStarbucks outbreak on Twitter (a patriotic “movement” according to Breitbart) and by a meme suggesting the coffee giant was privileging foreign workers over veterans (even though Starbucks has a separate program for veterans).

Starbucks’s experience shows how brands are not immune to political and cultural polarization. These days, companies often feel compelled to pursue social impact and to take value-based positions on issues of the day. But sometimes those actions can get them into trouble.

In a separate survey of the purpose of brands, Starbucks has the most polarizing brand of all (perhaps because the survey was done in mid-February). In a ranking of 150 companies, Democrats place it 85 places above Republicans.

“We’re seeing these brands break along partisan lines just as the rest of the culture is,” says Sebastian Buck, CEO of Enso, a L.A.-based brand marketing agency that commissioned the research. “Brands operate in a social context and people make choices about brands every day within the context about what’s happening.”

The online survey of 3,000 people measures “how people perceive a brand’s purpose, how closely it aligns with their own values and motivations.” It’s not, in other words, a measure of actual do-gooding, but rather of how people perceive the mission and purpose of organizations (some nonprofits are included).

NPR, NBC, Ben & Jerry’s, and Target also score much more highly among Democrats than Republicans (at least 50 places), while the opposite is true for Exxon Mobil, Boeing, Pfizer, Unilever, and AT&T, all of which skew Republican.

Among the population as a whole, three tech brands appear in the top 10 (Amazon, Google, and Microsoft), with Goodwill and Girl Scouts of America in the top two places. Dove and Subway make the top 10 as well, indicating, says Buck, that consumers may value utility and convenience as much as more conventional social good activities.

Though it may be tempting to be all things to all people, companies may have to increasingly choose which side of the fence to be on. “We think brands have to stand up for their values and the things they care about,” says Andrew Wisniewski, a junior strategist at Enso. “There’s less opportunity to straddle that line and sit in the middle. Instead, they’re going to have to come down on one side or the other.”

The survey shows generational divides when it comes to purpose perceptions. Baby boomers tend to favor old-line brands like Proctor & Gamble, Hewlett Packard, and Newman’s Own, while millennials rank brands like Twitter, Starbucks, and Spotify most highly. (Newman’s Own ranks 59 places lower among millennials, despite giving all its profits to charity.) Meanwhile, millennials are more likely to say that creating change in the world is a “personal goal” (68% to 42%) and less likely to “buy American when I can” (62% to 88%). Partly because of ideological and generational preferences, the rankings throw up some strange results. Patagonia, which skews “elite” and “male,” places only in 118th place, despite widely being seen as a social business pioneer. Salesforce.com, which is favored by “traditionalists” (that is, “those who identify as uninterested in experiencing other cultures”) ranks in 138th place. This despite its founder, Marc Benioff, inventing the Pledge 1% philanthropy model.

The gaps between reality and perception could encourage companies to pursue marketing over substance. In other words: to ensure the world knows about its good deeds as much as actually carrying out good deeds. But Buck says inauthenticity is dangerous. “I think the Pepsi debacle was an example of that,” he says. “I think people are getting a lot more discerning about things that look like a veneer of doing good.” He adds, “The gap between perception and reality has to narrow [over time], given the world of transparency that we live in. It’s becoming more important for brands to ask not just ‘what is our latest cause marketing campaign’ but ‘substantively what are we actually doing to improve people’s lives?’”

The brands with the greatest purpose, as perceived by their customers.

In January, when Starbucks announced a plan to hire 10,000 refugees over five years, it may have hoped to gild its reputation for doing good. But, if so, it was in for a rude surprise. By mid-February, its brand perception score had fallen by two-thirds, according to one ranking.

What people think about the role of business. [Image: courtesy Enso]

And about their role in the world. [Image: courtesy Enso]

Republicans and Democrats feel differently about what businesses are valuable. [Image: courtesy Enso]

What informs this? Their view of other cultures . . . [Image: courtesy Enso]

and what direction the country is headed. [Image: courtesy Enso]

Here’s the full list of 150 companies ranked by customers’ perception of their purpose. [Image: courtesy Enso] 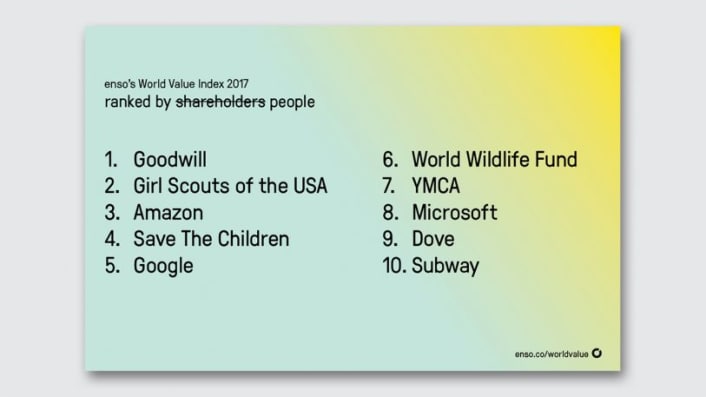