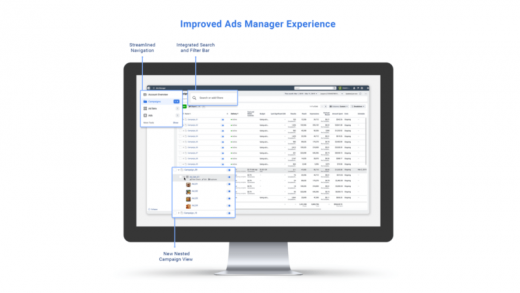 As early as February, there were reports Facebook was updating its Ads Manager interface. In April, the company confirmed the update and said it was beginning to roll out the new version of Ads Manager. Facebook won’t confirm how many advertisers now have access to the updated platform, but it appears there was a broader push last month, with more marketers confirming they received it.

What’s the verdict so far? Largely positive among those we’ve spoken with, but several said Facebook needs to go further. Jessica Budde, a digital marketer at the full-service digital agency Cypress North, said she got access to the new Ads Manager mid-July and is still getting used to it. Jake Newbould, a digital marketing specialist at the social media and communications firm Brilliant Agency, said the new UI landed at his agency around the same time.

Newbould said if you use Google Ads, the new Facebook Ads Manager will feel familiar.

The marketers we surveyed said the updated Ads Manager interface is easier to navigate and has a cleaner look and feel than the previous version.

Henke’s agency got access to the new interface more than a month ago. Newbould, who has had access to the updates since July 17, said he is embracing the change.

“The UI feels and looks a lot cleaner, like the sidebar to navigate between campaigns, ad-set and ad-level with the option to pin the sidebar,” said Newbould, “Creative tools in the sidebar is helpful also to get a clear overall view of your campaign creative.”

Henke, along with Gil David, a Facebook advertising consultant and owner of Run DMG, and Angel Buendía, a Facebook certified consultant in Mexico City, all said the new platform is faster.

“The main benefit has been speed,” said Buendía. For him, the updates have been mostly cosmetic with marginally positive impact, “It is less cluttered visually and that helps somewhat, and it is simpler to use than the previous version.”

Budde and Melissa Breslin, a digital marketing consultant based in Colorado, both commented on how much they appreciate the new nested campaign structures.

“I’m all about the new nested campaign view, and have been looking forward to this change ever since they announced it was being tested,” said Budde, “I love being able to easily see the ad sets and ads within a campaign without having to move to a different tab.”

In addition to the new campaign view, Breslin said she likes the auto-naming capabilities and improvements to reporting.

“In particular, I prefer the new system for rankings — quality, engagement rate, etc. — in that they provide insight on an average scale with comparison rankings versus the previous numeric system. This change rolled out before the Ads Manager update, but is worth a note,” said Breslin.

While most of the marketers we spoke with reported the new Ads Manager is faster, Breslin has had a much different experience.

“It’s still shocking to me how slow the interface can be at times considering the kinds of budgets folks are sinking in,” said Breslin.

And not everyone is on board with the new look and feel. David said the redesign doesn’t “feel” like Facebook.

“In fact, it reminds me more of the Google Ads UI. The totals and column names are only slightly bolder than the data itself, which, for me, makes it a bit harder to read the data,” said David.

Budde is also not a fan of the design changes. “I wish they hadn’t changed the colors on us. I really don’t love the new, all bright, white look — it’s a bit much.” She said she misses the alternating row colors and the blue-grey color schemes of the old version.

Budde and Henke both said they hope Facebook will roll out a dark mode option for the platform soon.

“I really like the white look, but I’m hoping for a dark version which would really be helpful for a colorblind person like myself,” said Henke.

“There are so many options and so many placements, I think switching the placement areas to be sorted by placement and not by the platform was the worst change,” said Henke who admits this is a personal preference and has a lot to do with how his team manages campaigns, “It’s top-down for me: platform then placement. That is how we think about our performance and ad spend. Switching to placement over platform throws me off, but again the only constant in this industry is change, so we’ll have to adapt.”

More work to do

Budde said she thinks the new Ads Manager interface is a great start, but wishes Facebook would address a few simple updates advertisers have been requesting for some time.

“For example, it would be amazing to be able to edit two dynamic ads at once if the assets are the same. You can do it with regular ads, but not dynamic creative,” said Budde. She’d also like to have an offline bulk editing tool, “My number one gripe with Facebook ads is how wonky it is and how difficult it can be to edit more than one asset at a time.”

Breslin said she’d like to see more filter options to help cut through the clutter.

“I’d love to see an update that would allow advertisers to filter by time period and only see those campaigns that delivered during said time period,” said Breslin, “For folks who have been advertising for years, there’s too much noise in the campaign view.”

Buendía also believes there are a lot of issues Facebook should be looking into beyond simply rolling out an interface change. He and Budde both consider the interface updates a minor change.

“All in all, I’m glad they gave us something easier to navigate, but really this is just a face-lift,” said Budde, “There’s so much more that Facebook could do to save time and eliminate frustration for advertisers. We need a more serious update.” 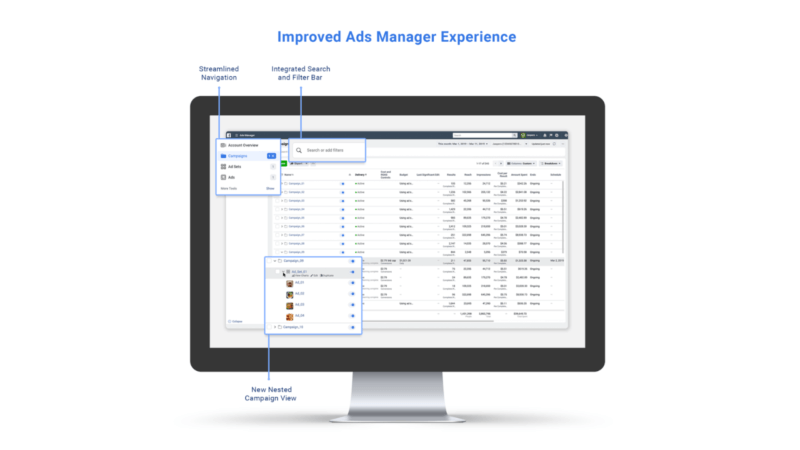