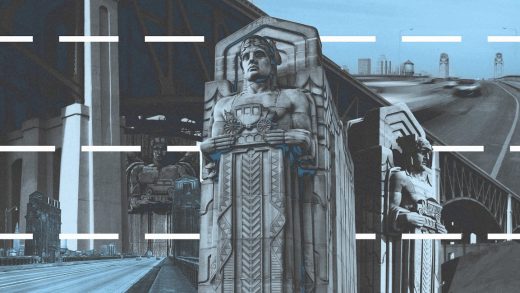 Fans are complaining about the new name of Cleveland’s baseball team. Here’s why it’s actually brilliant

After years of complaints and controversy over its racist caricature mascot, Cleveland’s Major League Baseball team on Friday announced that its new name next season will be the Guardians.

It was a polarizing choice. Initial fan reactions were mixed, with some pining for a throwback name from the team’s earliest days, and others blowing the “cancel culture” dog whistle. Despite the knee-jerk reactions, the name actually has a deep connection with the city and its history.

The name is an homage to the Guardians of Traffic, four massive 1930s-era stone sculptures that adorn the pylons marking a major bridge over the Cuyahoga River, right next to the team’s downtown stadium. Each is double-sided and features square-jawed neoclassical figures holding historical modes of transportation, including a covered wagon, a stagecoach, and a 1930s automobile. With their chiseled muscles and winged crowns, the sculptures exude the strength of what was once one of the industrial powerhouses of the United States, with a dash of art deco elegance for a modern city on the rise. When the bridge opened in 1932, these design elements became emblems of the city.

Fortunes eventually changed for Cleveland, with its industrial might fading and fires repeatedly breaking out on the river beneath the Guardians’ watch. In its video announcing the name change, the baseball team (via a voice-over by actor Tom Hanks) evokes the Guardians as symbols of an underdog city supported not by the opinions of outsiders or the toothy grin of an offensive cartoon mascot, but by residents themselves. A new logo even references the winged crowns of the team’s new namesakes. “We wanted a name that strongly represents the pride, resiliency, and loyalty of Clevelanders,” team owner Paul Dolan said in the official announcement.

Resiliency may be the operative word here, as sculptor Henry Hering’s Guardian statues were once on the brink of demolition.

In the mid-1970s, when preservationists were calling for the bridge to be included in the National Register, plans were being made to squeeze more lanes of automobile traffic into the 83-foot-wide bridge. Planned and designed beginning in the late 1920s by engineer Wilbur J. Watson with architect Frank R. Walker, the bridge was originally intended to be two levels, with four vehicle lanes and two streetcar tracks below. The bottom level was never built, forcing all of the bridge’s traffic load onto one level.

As noted in the bridge’s National Register of Historic Places nomination form submitted in 1976, the county engineer was then proposing a widening of the roadway from 60 feet to 76 feet, leaving just 7 feet of the bridge’s width for anyone daring to cross it without a vehicle. The roadway expansion would have necessitated the removal of the pylons, and the destruction of the Guardians of Traffic—all to make more room for traffic.

Writing in defense of the bridge, preservationist Eric Johannesen of the Western Reserve Historical Society explained in the January 1976 nomination form that “the sculptured pylons, from which the architectural character of the bridge derives, are the only major sculptural monument in the city in the Art Deco idiom.” This nomination, presented 44 years after the bridge opened, came earlier than the convention of waiting half a century before lobbying for preservation. But the planned expansion of the roadway, and its potential destruction of the Guardians of Traffic, called for action. In his argument for including the bridge on the National Register, Johannesen noted that “it is of exceptional significance because of the uniqueness of the sculptured pylons[.]”

The National Park Service agreed, and the Guardians of Traffic were saved. As Cleveland Plain Dealer architecture critic Steven Litt points out, the Guardians have lived on to become icons in the city, overlooking a river that now carries canoeists and paddleboarders instead of toxic flames. An upgrade in the early 2000s even pushed back against the road-widening instincts of earlier traffic engineers, squeezing the roadway down to four lanes and converting nine feet of car space into a protected bike lane.

The baseball team’s new name is bringing renewed attention to the Guardians of Traffic as symbols of the city and examples of preservation-worthy architecture. They also stand as a reminder that, despite the importance of traffic and mobility, cities have much to lose when the needs of cars take precedence over all else. 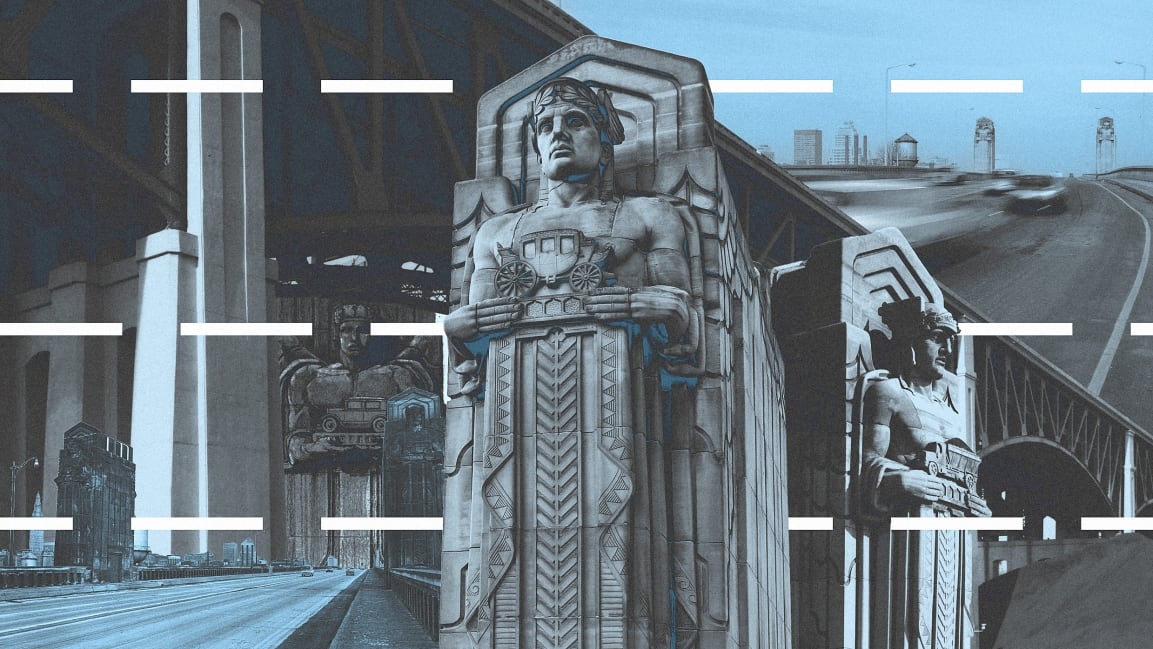