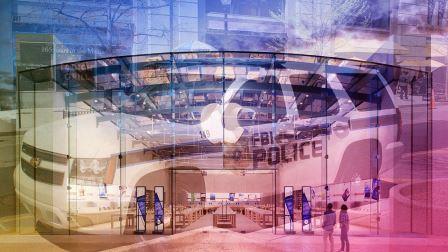 From Fines To Jail Time: How Apple Could Be Punished For Defying FBI

The fines and punishments that Apple could face by continuing to defy the FBI’s demand that it help unlock the iPhone of San Bernardino shooter Syed Farook are considerable, even by the standards of one of the richest companies in the world.

Many of the possible penalties are discretionary to the court where the dispute is currently being heard. The case, at least for now, resides in the U.S. District Court for California’s Central District. If Apple openly defies or ignores the demands in the order signed by Magistrate Judge Sheri Pym, the court would most likely wield a civil contempt-of-court charge as the mechanism to coerce Apple to comply, explains Cooper Levenson attorney Peter Fu in an email to Fast Company.

The court could also mete out civil punishments like fines. If such penalties aren’t regulated by a statute, they have to be based on precedent, Fu says.

From Monetary Penalties To Jail Time

“The issue of whether this matter is regulated by statute is ambiguous, as the DOJ has argued the matter under the All Writs Act, an arcane body of law which broadly allows courts to issue writs, subpoenas and orders,” Fu says. “Whether the DOJ’s use of the All Writs Act [is upheld] will largely determine whether monetary penalties could be imposed.”

Apple attorney Theodore J. Boutrous Jr. told the AP Tuesday that the tech giant will challenge the government’s use of the All Writs Act, as well as suggest that the whole matter would be better handled by Congress.

If the All Writs Act theory is allowed to stand, the federal district court can determine any reasonable amount deemed necessary to move Apple to comply with the demands in the order. “That could result in fines in the hundreds of thousands to millions of dollars,” Fu says. The problem in this case is that there’s just no clear precedent. Estimating possible penalties is difficult because it will be largely up to the discretion of the court.

Apple’s Standoff With The FBI

Some legal experts believe it would be proper to base fines in the Apple case on the Communications Assistance for Law Enforcement Act of 1992. Under CALEA, fines are capped to $10,000 per day, but the fines keep accruing until a final determination, if a subpoena is challenged.

One possible guideline may come from a case in which the government threatened to fine Yahoo $250,000 a day if it refused to hand over user data to the National Security Agency, says Electronic Frontier Foundation staff attorney Andrew Crocker. And the size of the daily fine was set to double every week that Yahoo refused to comply.

Those are all possible civil penalties, but the court could also assign penalties associated with criminal cases.

Apple could be held in criminal contempt of court for defying the order signed by Judge Pym. This legal mechanism is often used when no amount of civil coercion (like monetary fines) can make the party in question comply with the court’s demands,” Fu explains. Courts can use this non-monetary punishment on journalists who refuse to divulge their sources, for example. The goal isn’t to compensate an injured party, but rather to “punish the target party and to vindicate the authority of the court,” Fu says.

If the case goes all the way to the Supreme Court, and Apple refuses to comply with a demand to adhere to the Pym order, then things get a little crazy. “Under these circumstances, there is a universe of possibilities where Tim Cook could actually go to jail for refusing to comply with a lawful order of the court,” Fu says.

“This is because Apple has already publicly declared that it will not comply with a court order to unlock the iPhone,” Fu says, “and as such, necessarily forces the courts to favor punishment over coercion.”

How It Could End Up At The Supreme Court

Chances are slim that the case even gets heard by the Supreme Court, and slimmer that Apple would be held in criminal contempt before the court, but that outcome is within the realm of possibility.

Here’s how Apple’s dispute with law enforcement could find its way to the High Court.

Indeed, it’s very unlikely that Apple will honor a court order won by the FBI demanding that Apple write code that would enable access to the data on Farook’s iPhone 5c. And the FBI isn’t likely to withdraw the order, which was signed by judge Pym in the federal district court in California’s Central District last Tuesday, February 16.

Specifically, the order demands that Apple build for the FBI a custom version of the phone’s operating system that would disable the device’s native security features. Those features normally slow down, then prevent altogether, any attempts to guess the phone’s password. A successful login to an iPhone running iOS 8.0 or after creates a one-time key that unlocks the encryption on the data. After 10 unsuccessful attempts, data on the phone is rendered permanently inaccessible.

Apple has until February 26 to file an application with the court, saying that compliance with the order would be “unreasonably burdensome.” (If it neither files nor complies with the order, the FBI attorneys could ask the court to hold Apple in contempt.)

Apple will very likely file its “unreasonably burdensome” application to the court this week. The company will also make a broader policy argument in the filing that assisting the FBI in this way would set a dangerous precedent going forward, says the EFF’s Crocker.

The Central District Court in Riverside will hear the case again on March 22. Crocker explains that the court order that came down last Tuesday was “preliminary” and meant to elicit a response from Apple, and that the real order will come after the March 22 hearing.

While Judge Pym is the magistrate who reviewed the government’s case and signed the order, she hasn’t officially been assigned the case, a court official said. She will, however, be the presiding judge when the case is reviewed again on March 22.

If either the FBI or Apple is unhappy with the magistrate judge’s final decision on the order (almost a certainty), the case will be transferred to another district court judge, also in the Central District’s Western Division.

For example, if Judge Pym agrees that compliance would be unnecessarily burdensome for Apple, the FBI’s attorneys would almost certainly ask that the case be transferred to the other district court.

It’s far more likely, however, that the judge will reject Apple’s claim, on the grounds that Apple is in the business of making software, so creating the firmware to break into one iPhone wouldn’t be that much trouble. In that case, Apple will very likely ask that the case be assigned to another district court judge.

In the Ninth Circuit Court of Appeals, the case would first be heard by a three-judge panel. If either side was unhappy with the result, the case would become an “en banc” issue, and the full court would then hear arguments.

However, there’s reason to believe that if Congress doesn’t intervene during the long process of moving through the courts, the Apple v. United States case has a reasonably good chance of being heard by the High Court. It would, after all, bring to a dramatic head a fight that’s been brewing between law enforcement and the tech industry for a long time.

David O’Brien, senior researcher at the Berkman Center for Internet & Society at Harvard, points out that federal law enforcement has been trying to bring the whole matter to a head for quite some time. Law enforcement wants the establishment of a firm set of rules defining tech companies’ responsibilities when asked to assist in an investigation. O’Brien says the courts were definitely not the government’s first choice of venue for this, but rather its third choice.

Congress was its first choice. Law enforcement has been pressing members of Congress to pass a bill for many months, and while some bills are circulating, nothing’s expected to reach the president’s desk any time soon.

This all leads to the question: Can a court battle centered around a device used in one of the deadliest terror attacks on U.S. soil really produce a set of rules that effectively balance the government’s need to fight terror with the tech community’s need to protect consumer data privacy?

The History Of Apple (In Three Minutes):