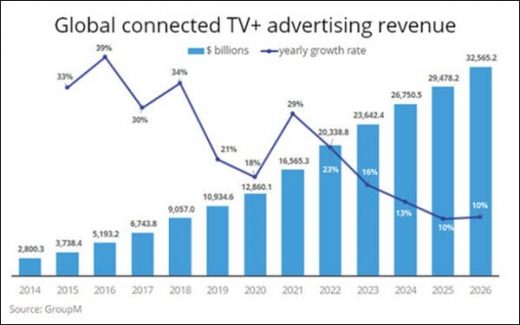 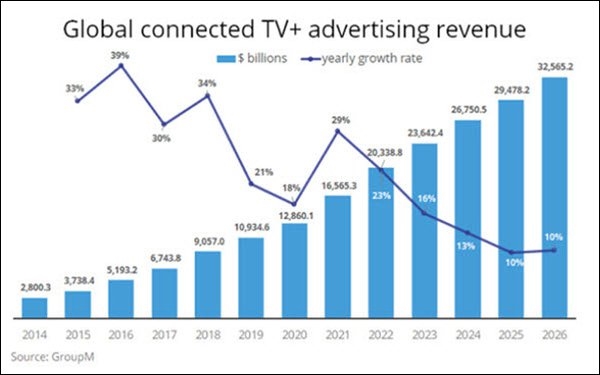 While still a small portion of total TV ad spend, connected TV’s (CTV) growth is accelerating rapidly — along with the use of programmatic for buying it, according to GroupM.

(A quick terminology note: GroupM uses the term “CTV+” for its projections to signify that, unlike some other industry definitions of CTV, its own includes video advertising associated with professional content that might be delivered to a mobile device or PC, rather than just to TV sets.)

In most major markets, TV advertising investment will be roughly flat, at about 1% to 2% per year, through 2026, “as the largest advertisers continue to incrementally shift spending,” says GroupM’s report.

“The primary reason for all of the growth we expect in connected TV+ advertising is that these environments are simply where a large and growing share of viewing is shifting,” the report notes.

However, the analysts also point out that much of the CTV/streaming business will remain ad-free, “largely because the dominant players, such as Netflix, Amazon Prime and Disney+, are ad-free and plan to remain so in most of the world for the foreseeable future.” And while other service providers intend to sell ads, “they are investing less than these three in original programming, which will likely result in lower viewing shares. Consequently, the emerging world of television will simply offer fewer opportunities to advertise.”

While this will make television less useful for achieving reach and frequency, the upsides will be new addressable opportunities like matching spending choices with business outcomes, and  widespread adoption of audience-based targeting. That, in turn, should facilitate more uniform campaign standards and new marketer/media owner partnerships around the world, says the report.

Separately, Mike Moore, GroupM’s director of programmatic development, told Beet.TV this week that programmatic is growing so rapidly within CTV that while “it’s probably not yet” the dominant CTV buying method, he is “fairly confident” that it will be by next year.

For buyers, CTV is “a tough landscape to navigate,” he said, noting the multiple players and points of access that need to be assessed.

GroupM wants to engage with publishers, and is looking to supply-side platforms (SSPs) as a point of contact for those relationships, he said. The agency recently selected SpotX as its primary partner for buying digital video and OTT ad inventory.

CTV will account for about 12% of total global TV ad spending by next year, according to GroupM’s new forecast.
MediaPost.com: Search & Performance Marketing Daily