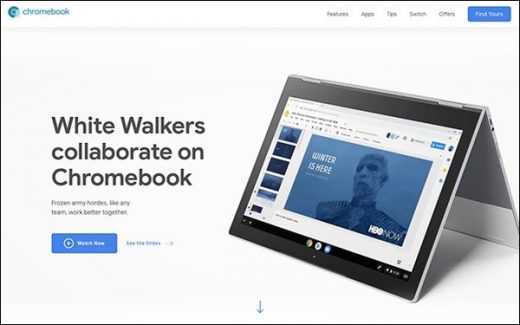 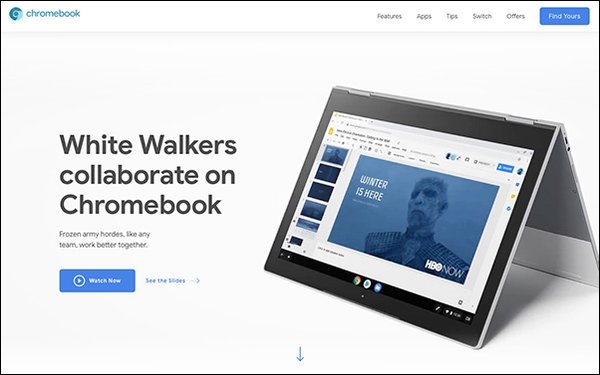 Google positions its hybrid Pixel Chromebook to compete with Microsoft Surface and other similar products in its latest advertising campaign featuring HBO’s popular “Game of Thrones.”

The message for the ad campaign is how the villains in George R.R. Martin and HBO’s series collaborate on Chromebook, with the focus on working together, building armies, collaborating, and winning wars.

The character uses Google Slides to coordinate an attack with his army against the fictional world known as “The Realm.”

“You’ve heard it countless times,” per Google’s blog post. “But what you don’t hear much about is the effort that goes into planning the attack on Westeros during the winter — it’s a real operation. There are new recruits to onboard, wars to avoid, and 700-foot walls of ice to break through. Under these circumstances, a little organization and a Chromebook go a long way.”

Onboarding new recruits has become important for the White Walkers, so the Night King collaborates on a presentation. He types in a login password to create a presentation and chooses the font —i Iceberg — typing in the phrase “winter is here.” They he chooses music from Spotify to go along with the presentation. The new ad features Foreigner’s hit “Cold as Ice.”

The campaign also details the presentation in Google Slides, highlighting everything from recruitment levels and growth, to why it is an exciting time to be a Walker and an organizational structure.