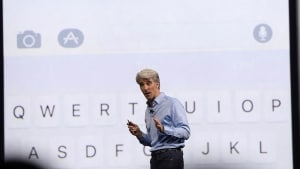 Apple today updated its website’s “Leadership” page, revealing that the executive who leads development of the company’s operating systems, Craig Federighi, is now in control of its digital assistant, Siri. Here’s the actual text at Apple’s corporate site:

Craig Federighi is Apple’s senior vice president of Software Engineering, reporting to CEO Tim Cook. Craig oversees the development of iOS, macOS, and Siri. His teams are responsible for delivering the software at the heart of Apple’s innovative products, including the user interface, applications and frameworks.

And that’s just it. Apple wants Siri to be at “the heart” of all things Apple. Siri is becoming more and more central to the operation of the Apple products we depend on. So it’s natural that its control would fall under Federighi instead of its former owner, Eddy Cue, who manages Apple’s services business.

Siri has already become involved in a range of tasks performed on a growing number of Apple products. It can be used to control an entertainment system in the living room (via Apple TV), the lights in the hallway (HomeKit), infotainment and communications in the car (CarPlay), and music and messaging and in the kitchen (Apple Music, iMessage). It can also set up and monitor workouts for the gym, pool, or running trail (Workout app, Apple Music, HealthKit).

The assistant will find its way into more services in the coming years, and it will need to be smarter about the way it assists us. In the coming years, for instance, Siri will likely be more proactive about helping with things like checking traffic an hour before it’s time to leave for the airport to catch a flight.

The rise of digital assistants like Siri is driven by a couple of major themes in tech–natural language and artificial intelligence. We’re getting more and more comfortable with talking to phones, computers, and other gadgets as if they were another human being, as opposed to signaling to them by typing on a keyboard or tapping on a phone screen. If you’ve used Amazon’s Echo or one of its competitors at home you know what that means. This shift is driven in part by the changing shape of our technology. Very small gadgets like smartwatches and smart headphones are taking their places on our bodies, and those things require a different modes of interaction–the spoken word being chief among them.

The main reason Siri has become so important to Apple is that it is one of the biggest embodiments of artificial intelligence in the company’s products. AI is what makes Siri more than just a voice-recognition system. Apple’s AI team has been using machine learning and deep neural networks (AI systems that reason in a similar way to the human brain) to help Siri understand the intent of our verbal commands in more scenarios. Apple wants users to talk to Siri in a natural way, instead of having to speak canned orders to it. That’s good, but it puts the onus on Siri to understand what the user means when a specific intent can be voiced in a hundred different ways.

Apple executives will tell you that their mission in life is to make products and services that make your day’s tasks easier. In order to do that Siri needs to understand more than just the user’s commands. It must also collect and analyze data about the context in which a task is requested for things like calendar information and weather conditions. Most importantly, the assistant must understand the needs and habits of the user requesting them. The platform that collects and contains all this data is the operating system.

So putting Siri under Federighi’s care makes sense. He’s proven a very effective steward of Apple’s operating systems over the years. His challenge now is to continue to thoughtfully introduce Siri in places in the OS where it can reduce even more hassles over the course of a user’s day.