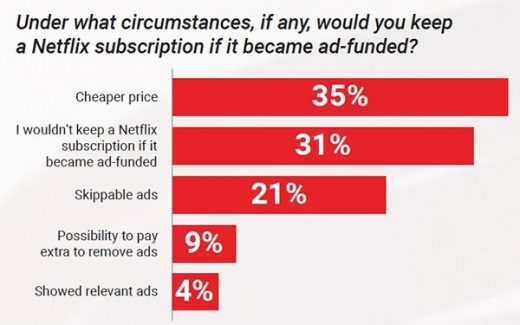 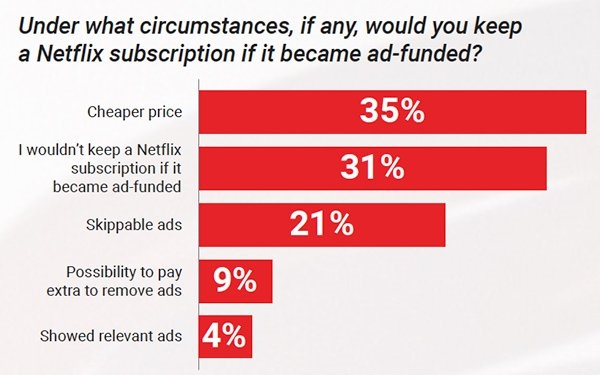 Budget-conscious consumers could flock to Netflix’s ad-supported tier, Basic with Ads, scheduled to launch in the United States on November 3, along with Australia, Brazil, France, Germany, Italy, Japan, Korea, and the U.K.

Performance marketers have begun to view streaming and connected TV services as a valuable media in which to help brands expand advertising strategies.

More than one-fifth of U.S. consumers subscribe to streaming services. Of those, 42% subscribe to Netflix, making it by far the No. 1 subscription service, with Amazon Prime taking No. 2 at 22%, and Disney+ at No. 3 with 16%.

When asked whether they would keep a Netflix subscription if it became ad-funded:

“I would have thought that the number of streamers would be higher given the ease of access to stream content and as a lingering effect of the pandemic when the majority of people were at home consuming more television content,” wrote Rachel Conforti, senior vice president of marketing at LoopMe, in an email to Search & Performance Marketing Daily.

Also noteworthy, she wrote, was the top two reasons that consumers cancel a streaming service are affordability and lack of interesting content.

“As we go through this economic downturn, it’s a telling point for all AVOD services to release more compelling content and make prices affordable during a time when people are watching their wallets more closely,” she explains.

“This signals that we could see an uptick in subscriptions as more viewers may want to join at a lower cost to enter,” she explains.

In the past month, 9% of consumers canceled a streaming service subscription. About 31% also cited lack of interesting content as a reason for canceling.