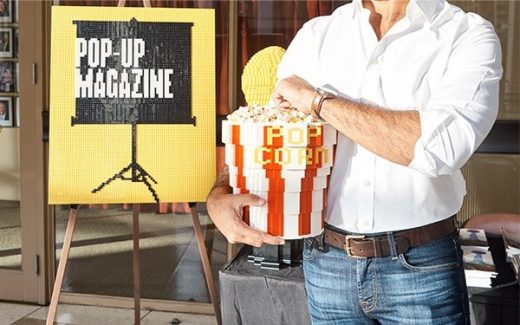 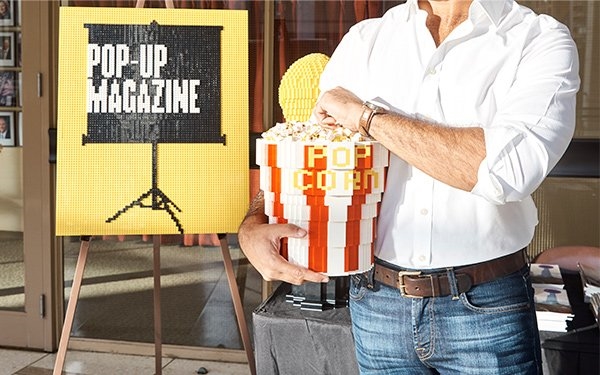 “Each time we go into a show, we ask our sponsors if they are willing to push the envelope with us to go to the next level of branded storytelling in a live environment,” publisher Chas Edwards told Publishers Daily.

The live show had four commercial breaks; Pop-Up Magazine’s sponsors integrate with the storytelling-style of the show. Another first — This season’s show had a theme: “The Escape Issue.” The show’s sponsors included Amazon Studios, Google, Chanel, Haas Foundation, LEGO, MailChimp and SF Opera.

This year, Pop-Up Magazine offered more ways “to let the sponsors touch the audience before and after the show,” he added.

For the first time, the show hit San Diego and Vancouver, as well as its usual tour of San Francisco, Oakland, Los Angeles, Washington D.C. and Chicago.

Every winter, spring and fall, Pop-Up Magazine goes on a U.S. tour with different contributors, themes and audiences. The live shows are not recorded. Pop-Up Magazine is 90 minutes to 100 minutes on stage.

“Audience members were asking for souvenirs to remember the show,” Edwards said.

Google, a returning sponsor, showed a short film as part of its “Search On” campaign. It featured an agoraphobic woman who uses photography and Google Street View to travel and see new places. Pop-Up Magazine’s Brand Studio worked with Google and the photographer, Jacqui Kenny, to record a live ‘intro’ to the film.

Postcards of Jacqui’s photography were given out to audience members at the event..

While Google’s branded ad did not take up more time on stage, it was “a part of a bigger audience experience this time,” Edwards said.

A whimsical video was played by LEGO during the show, but in the lobby of the theater, audiences members could also admire and pose with installations built from LEGO bricks.

Three artists contributed to the project: Andy Bauch, who created a painting of Russ & Daughters Delicatessen in LEGO for the New York show; Adam Ward, who made a box of popcorn; and Sean Kenny, who created a large “Pop-Up Magazine” sign with its logo.

In the Bay Area, the two lead performers in the San Francisco Opera’s “Figaro” sang a 90-second ad from the performance.

“It is meeting up with your friends, walking around the lobby, meeting contributors at the after party, having a drink with someone you met at the show,” he said. “Pop-Up Magazine is a whole evening.”

The goal with this season’s branded ads was to “give the audience interesting story-based experiences from when they arrive at the theater to when they leave the after-party, like a keepsake to take home.” “It’s a new frontier for us in working with sponsors,” Edwards said.

The upcoming winter show will be in February/March 2020.