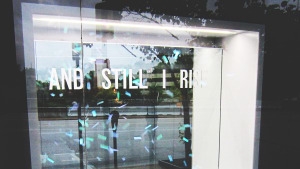 This Is Where Hillary Clinton’s Unused Election Night Confetti Went

WHO: St. Louis-based visual artist Bunny Burson (former executive director of the President’s Committee on the Arts and the Humanities during the Bill Clinton administration) created the piece that’s housed at the Bruno David Gallery in Clayton, Missouri.

WHY WE CARE: To say that November 8, 2016 didn’t turn out the way anyone planned is an understatement. Enough words have been spilled on the matter to fill, well, basically the entire Internet, over and over until we’re desperate for a reprieve from the experience of reliving the 2016 election for the rest of our natural lives. Seeking out things like art and culture give our lives meaning when things stopped making sense about eight months ago. We live in fear of both the consequences of that night and of coming to terms with it, and of finding ourselves somehow feeling normal in a world that has proven itself to be anything but.

When struggling with the complex emotions that many Americans and people around the world have been experiencing since Hillary Clinton didn’t end up being the 45th President of the United States, words sometimes don’t do the job. The exhibit from Burson, though, reaches a place beyond words in a way that only art can. The confetti, which would have poured from the rafter at the Javits Center had Clinton won, now falls encased in glass, serving as a potent reminder of how small the grandest of ambitions sometimes turn out to be. But the words “Still I Rise” offer just a little bit of hope, too–that perhaps the next time a woman dreams a dream as big as the one Clinton had, she’ll meet a different fate. It doesn’t help us make sense of what happened, exactly, but it does speak to the feeling of loss and of what might have been.

It didn’t rain from the ceiling at the Javits Center in November, but what it’s been repurposed into can still inspire you.