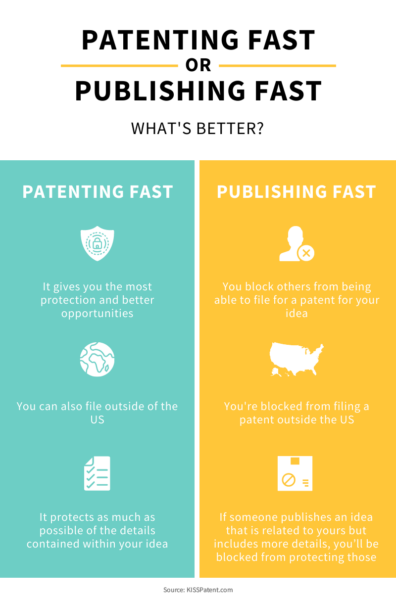 When Should You File a Patent For Your Business?

When you’re running your business, you’re focused on the metrics that matter: revenues in, expenses out. Profit and loss. Staff retention, customer growth and transaction values.

But, in the day-to-day rush of operating your business, are you forgetting one of the most important things?

Protecting your idea, product or service with a patent.

To prevent someone else from copying your idea (and potentially competing directly with you!) it could be time for a patent.

Of course, there are other benefits of having a patent but the most upside is protection.

The other key benefit: A patent often makes your business more valuable in the long run.

Here’s everything you need to know when choosing the best time to file for a patent for your business.

One of the most frequent questions I get from business owners is when it’s the right time to file for a patent. Is it better to patent your idea immediately? Or should you launch your product first and patent after?

While you may want to get your idea out into the world as fast as possible, you must be careful. You should seriously consider when to file a patent, as timing is everything.

Your patent strategy has two main options: file first (before sharing your idea publicly, called “publishing”), or publish first. As we’ll see, each has its advantages and disadvantages!

I’ve had clients that are eager to share their ideas with the world and they want to publish as fast as possible — but they’ve had strong patent strategies in place to protect their ideas.

Choosing a patent strategy is a business strategy. It shouldn’t be spontaneous! So be intentional when filing or publishing first.

What exactly is “publishing” an idea?

All public information about your idea counts as a publication. It can be a blog post, a tweet, a website, an app, an article — any time you promote the idea publicly is considered publishing your idea.

So, if you’re in an invite-only meeting, and you speak in confidence, then it’s not publication. But if someone randomly joins the meeting: be careful, that could be publication!

Also, watch out where you speak “in private.”

Discussing your idea in public place, like over drinks in a bar, could potentially count as a publication. Since someone could overhear the idea, it’s not technically private!

Going back to your patent strategy, be very careful who you talk with and where you discuss your idea. If you’re planning to file first, small talk could be a big mistake.

As we’ve established, you can certainly apply for a patent before you publish. But if you do…you may file for a patent on the wrong idea!

As your idea evolves, your patent may not even protect the later versions of the idea. You’d have wasted your money and time, without any protection.

To avoid filing too early, answer these questions:

You may be ready for a patent if the answer to all three questions is yes.

Filing early can be a mistake, but filing late nearly always is! If you do, you could be blocked by the US Patent and Trademark Office (USPTO) from getting a patent. That means that you won’t be able to protect your idea because you’ve missed the window to apply. 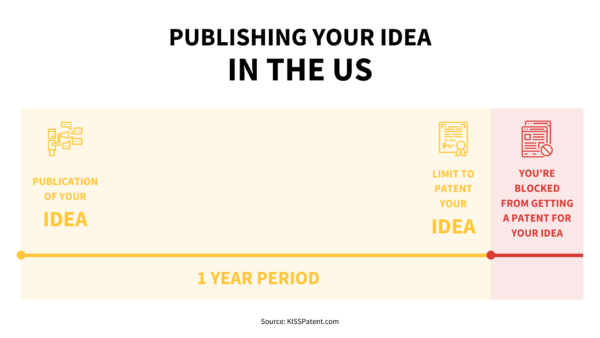 Different countries have different windows. In the US, you’ve got one year to file for a patent after publishing your idea.

Other countries actually require you to file before you publish your idea. So don’t take any chances…. If you’re going to publish, go ahead, but be careful to protect it first with a patent application

So should you publish first or patent first?

To publish first or patent first…that is the million (billion?) dollar question!

For instance, you can also file outside of the US.

This is perfect if your business is (or will be) international. For example, if you’re thinking about an app, it can easily grow across borders. You want to protect it in each country where you operate.

To file internationally, then you have to file first! That means you can’t publish your patent until you file.

Patents protect your business for 20 years from the date of filing. This ensures your business will grow safely, with a patent that protects all of the details contained within your idea.

Even if your idea isn’t fully baked, you could file a provisional application. This gives you one year to finalize your idea while still protecting it.

How it works: You file a provisional patent, publish the idea, and file for a fill patent within a year. It’s affordable, quick, and lets you keep developing and tweaking your idea while being protected.

Publishing first means can stake your ownership claim early. When you publish quickly, you block others from being able to file for a patent for your idea. This is because you (and only you, the inventor who publishes it) get one year of grace period to file in the US.

Staking that claim early is also the main problem with publishing first: you’re blocked from filing a patent outside the US! So, if you want to protect your idea outside of America, file before you publish.

Also, if someone publishes an idea that is related to yours but includes more details during the one-year grace period, you’ll be blocked from protecting those additional details.

If publishing first is your strategy, be sure to publish many details about your idea to protect yourself for one year. Plus, there are no extensions: If you don’t file your patent in the US within a year, you lose all of your US patent rights.

As you decide to publish or patent, develop an intentional patent strategy that protects you and gives your business the strongest foundation.

The last thing you want is for your idea to be copied, stolen or otherwise taken away from you because you neglecting to file a patent when the time was right!

Sign up for a free iSearch demo and get AI-powered agile competitive intelligence to search patents in real-time.

Dvorah is the CEO of KISSPatent, where she works with entrepreneurs and businesses to protect their ideas and innovations. Her latest product is iSearch, an AI-powered competitive intelligence tool gives innovators the semantic search capabilities they need to break new ground faster and better. … View full profile ›