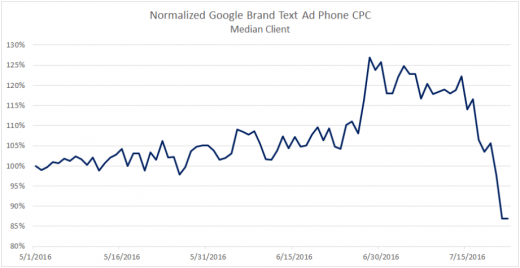 While we are at the mercy of Google’s auction systems in determining CPC, we can install safeguards to ensure increases are controlled.

Branded keywords, or keywords that include the name of the advertiser bidding on those keywords, have long been a source of controversy in the paid search industry. For years, many paid search managers grouped these keywords into reports that reflected total account performance.

This tends to overinflate the value of paid search campaigns since most brand queries are navigational and reflect a user that is already intent on buying from the brand searched for. As such, brand conversion rate is typically significantly higher than that of non-brand traffic and high brand return on ad spend (ROAS) can cover up underperforming non-brand campaigns.

These days, most advertisers are hip to the fact that they should be looking at brand and non-brand performance separately. However, there have been a lot of changes over time that might impact an advertiser’s brand keyword strategy, starting with a significant increase in the price of these keywords over the years.

Google has long given advertisers an advantage over competitors in bidding on their brand terms by way of quality score, which is generally very high for an advertiser bidding on its own terms and lower for competitors trying to show ads on those terms. This makes a lot of sense in terms of providing users with a quality experience since the query indicates that the user is probably most interested in going to the website for that particular brand and that Google should prioritize the brand’s listing as opposed to a competitor.

This quality score advantage plays a direct role in the price advertisers pay for brand keywords and has long suppressed average cost-per-click below what many advertisers might be willing to pay for brand traffic. However, that gap is becoming smaller over time.

Evaluating Merkle (my employer) advertiser data, average brand CPC rose more than 20% between Q4 2017 and Q3 2018 before final slowing over the last couple of quarters. 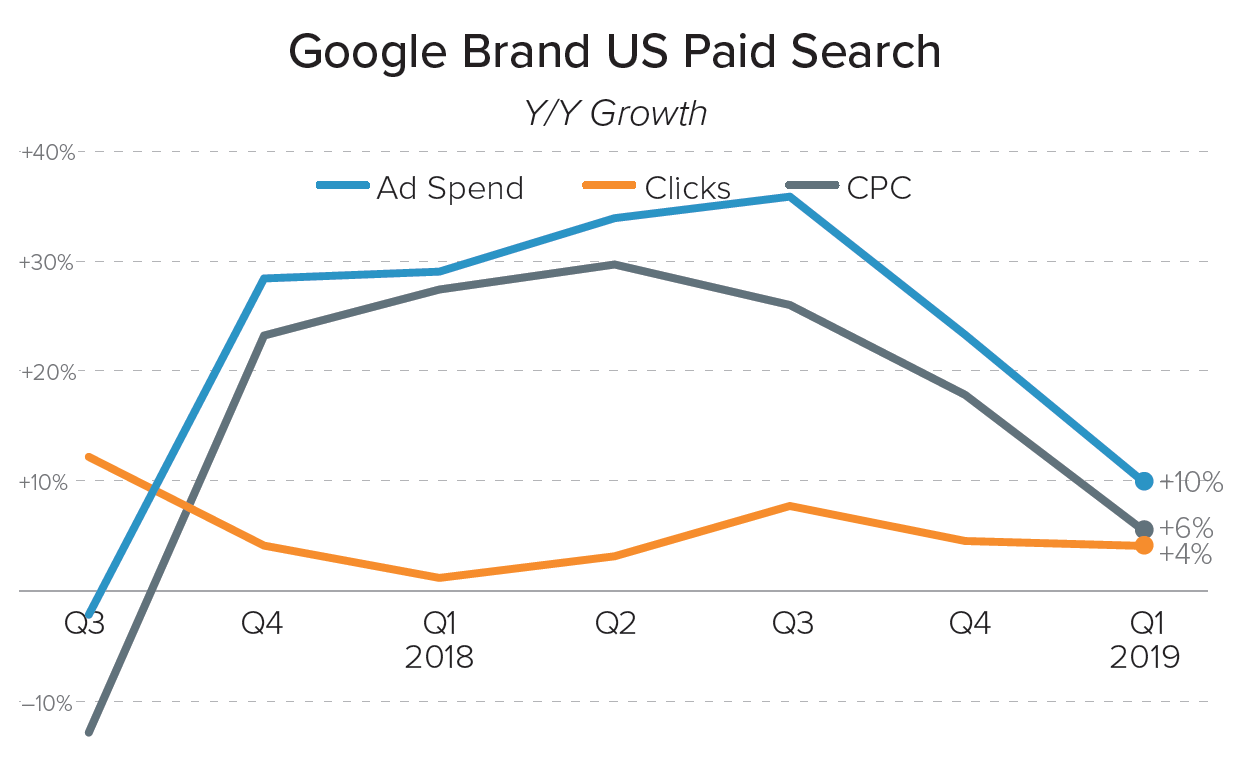 Google’s response to the increases that specific advertisers see typically references competitive forces encroaching on these auctions. That may well be true, but Google itself is responsible for the extent to which competitors can drive up brand CPC.

This goes back to the quality score advantage most advertisers have over competitors for their brand terms. Changes to advertisers’ relative quality score impact the ad ranks of those brands, which directly affects the CPC an advertiser must pay.

The opposite can certainly also happen, with Google giving competitors greater quality scores relative to an advertiser bidding on its brand terms. This would naturally increase an advertiser’s CPC.

Of course, Google’s response to unpalatable CPC increases is to call out the fact that advertisers have control over how much they pay for branded traffic.

Don’t like brand CPC? Just lower the bid of course!

Google is well within its rights to charge as much as it wants for brand clicks as long as advertisers are paying less than the max CPC assigned to those keywords. As such, shrinking the gap between the price paid for a keyword and the max CPC bid is one method of keeping CPC increases in a palatable range.

Advertisers that have already seen brand CPC go up significantly often combat the increase by testing out lower bids in a step-down approach to figure out how much traffic is lost at different levels. This can be useful in determining a bid that keeps the advertiser visible for as many brand searches as possible but also limits exposure to increases in CPC by reducing the gap between the bid and the average CPC.

However, the auction can change at any time with updates, either by competitors or Google, that throws a wrench into the conclusions reached from past test results, and a bid that gets an advertiser the vast majority of brand traffic today might not cut it tomorrow. Sometimes such increases can spawn from mistakes on Google’s end, but the search giant has become far less forgiving over time in making sure advertisers feel whole from such events.

Don’t ask for a refund

Back in 2016, brand CPC briefly spiked on phones before coming back down after an article of mine exposed the issue. 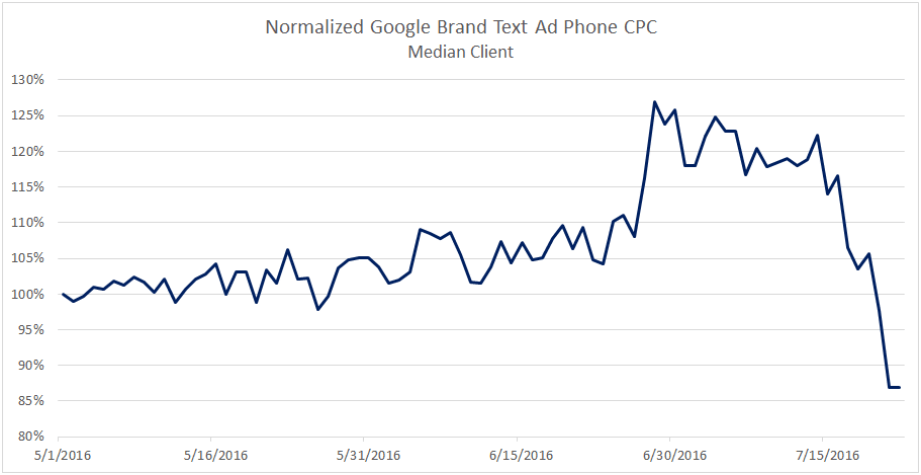 The increase was the result of an unintentional issue on Google’s end, and affected advertisers received a credit for the overspend from Google.

Fast-forward to 2019, and we recently saw a similar spike in brand CPC for some advertisers, attributed by Google to what it described as a ‘bug.’ CPC soon returned to normal, but there were no credits given out this go around, even for advertisers that saw dramatic increases in ad spend from the issue. Where keeping good relations with advertisers may have once led to a goodwill gesture to make good, Google now seems to favor the argument that as long as average CPC is below max CPC, spikes in spend are on the advertiser.

This transition in attitude only makes it more important for advertisers to control the gap between average CPC and bids to ensure there’s only so much wiggle room for a similar bug to ramp up costs since Google clearly won’t be saving anyone from itself. Setting logical budgets to cap brand spend based on campaign history and creating systems for intraday checks can also go a long way towards limiting the potential damage from surges in CPC.

I think it’s particularly true that advertisers need to be protective in these ways in light of Google’s recent decision to sunset average position.

Don’t let new metrics drive you to bid too much

Google announced in February that it would be eliminating the average position metric come this September. Instead of average position, it recommends that advertisers rely on impression and click share metrics in assessing how competitive a particular ad is in relevant auctions.

The announcement highlighted that average position is often a messy metric to use when assessing where an ad is falling on the page. However, as with most updates, it stands to reason that there might be some upside to Google in transitioning advertisers away from average position and towards metrics like absolute top impression share. This is particularly true for brand keywords, which are often judged based primarily on how well they take up the top possible placement in search results.

For example, some advertisers see a perfect average position of 1.0 for brand keywords but an absolute top impression share of just 75%. Once these brands no longer have average position to fly by, it’s possible that they’ll turn to bidding based on achieving as high an absolute top impression share as possible. Given 75% might not seem good enough, it’s quite possible this will lead to increased bids, which would, in turn, give Google more wiggle room in charging higher average CPC.

Knowing this, it might make sense for advertisers to assess brand traffic growth over time and make bid adjustments based on that. We find that Merkle advertisers typically see Y/Y click growth around 5%.

However, brand traffic growth is hugely dependent on efforts outside of paid search, such as print and television advertising. As such, it’s necessary to adjust expectations based on such efforts as well other big-picture factors such as shifts in overall market share and consumer demand for the specific offerings of an advertiser. This gets messy quickly but is at least one alternative data point to reference in assessing whether bids should get ramped up to maximize absolute top impression share.

Of course, none of this takes into account the role of organic listings in brand search.

Can I just not pay for brand listings? Maybe!

After years of debate, the answer to whether a brand can forego bidding on brand keywords altogether and still receive all the traffic from branded queries remains the same: it depends on the brand.

If the brand is big enough and the competition sparse enough that all or nearly all brand searchers end up making their way to the brand’s website without a paid ad, it should certainly consider turning off brand ads to save the money. However, most brands do see a dip in traffic and orders when turning off brand ads, and the only way to measure just how significant that dip might be is through testing – though again, changes to the SERP can render any past tests useless at a moment’s notice.

Advertisers’ appetite for bidding on brand keywords despite higher CPCs isn’t infinite, and there is a point at which brands should call it quits despite the potential for lost clicks and sales, though Google certainly doesn’t want to reach that point. While paid search marketers are somewhat at the mercy of Google’s auction systems in determining CPC, they can still take proactive steps to learn as much as possible about the incremental lift coming from brand ads and install safeguards to ensure increases in CPC are controlled.

Andy Taylor is a Senior Research Analyst at RKG, responsible for analyzing trends across the digital marketing spectrum for best practices and industry commentary. A primary contributor to the Merkle | RKG Blog, Dossier, and quarterly Digital Marketing Report, his 4+ years of experience have seen him master and provide valuable insights into topics that extend across paid search, comparison shopping engines, display advertising, SEO, and social media. Prior to coming to RKG, Andy worked as an event organizer for a political campaign and dabbled in freelance writing. A graduate of the University of Virginia with a degree in Economics, he likes to spend his free time watching documentaries and selling homemade ice cream sandwiches at farmer’s markets with his girlfriend.