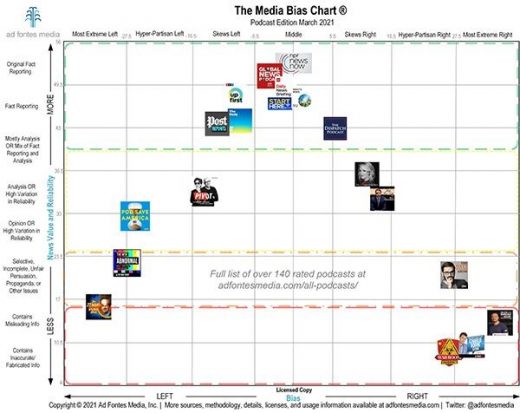 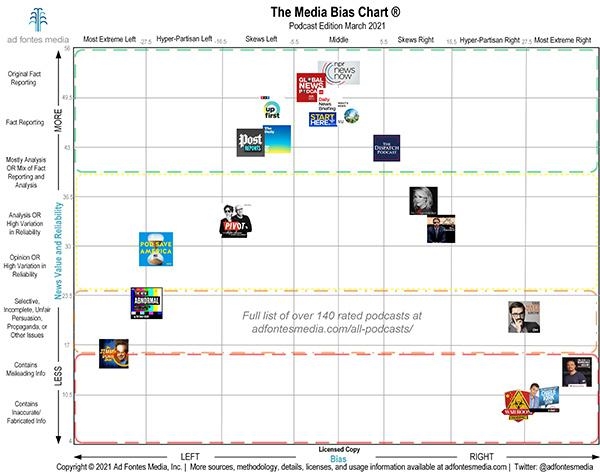 Ad Fontes Media is releasing a premium version of its media-bias chart to help advertisers determine where to buy media based on the brand’s values. The list names hundreds of online and offline publishers.

The model, founded by Colorado-based attorney Vanessa Otero, allows social networks, ad-fraud detection and contextual companies, and brands and media companies to understand content bias to help advertisers make decisions in a way that is similar to the way they use fraud-detection data to avoid fraudulent platforms.

“It started as a free and public source in 2016,” Otero said. “Everything is manually rating. It’s time-consuming.”

The paid version of Ad Apex for web and print publications publicly launches with about 500 publishers. The premium version offers downloadable and filterable data sets, licensed for commercial use.

Major brands, apps and media and media-technology companies such as Oxford Road, a performance audio agency, and one of the three top social networks use the model. Advertisers can create custom approval and denial lists.

Dan Granger, CEO and founder at Oxford Road, found a way to use the media-bias model for podcasts. “Consumers and advertisers don’t have warning labels, and they need them,” he said.

An unnamed podcast advertiser proved Oxford Road’s early trial of the model in the middle of a marketing nightmare, when a news and opinion personality whose podcast they sponsored went off the political rails, causing a backlash.

To address the challenge, Oxford Road turned to Ad Fontes Ad Apex, and now sets controls for where future advertisements run, allowing the brand to prevent such an incident again.

“Ads have to do a job, drive results, but often times there’s an inverse relationship between the quality of journalism on the shows performing the best, but some can perform the worst,” he said.

Everyone is a columnist, Granger said. Media and government often are not seen as ethical and competent. Proclamations by businesses promising to do good for their stakeholders must also consider the way they fund their media through advertising and sponsors.

“Sleeping Giants and Media Matters attack groups based on ideologies, and I don’t think they are unbiased enough to be credible and achieve their missions as advertised,” Granger said. “Brand safety is an advertiser’s existential threat.”

Granger said several of his clients don’t want to advertise anywhere near news, politics or opinion. The paywalls might have been designed to give publishers another source of revenue, but now they allow their journalists to do real journalism, because they attract readers interested in their style.

“The worst thing that can happen is if advertisers get so afraid that they stop sponsoring content, and throw the baby out with the bath water, because it’s too complex,” he said.

The media buyer’s chart helps advertisers determine where to spend their money. Oxford Road surveys the brand to understand its business values, the causes it gets behind publicly, and the types of people they want to reach. How the line gets drawn depends on whether the company is Patagonia or Black Rifle Coffee.

Otero used WeFunder to raise a $250,000 seed round. By its January funding close date, Ad Fontes Media had exceeded its goal by 140%, raising more than $360,000. She attributes the company’s fundraising success to consumer frustration with disinformation and strong market demand for solutions that help everyone better understand the news content that is delivered and consumed today.

The suite includes an Automatic News Reliability and Bias Filtering Application, and allows marketers to access Ad Fontes Media’s regularly updated database of thousands of news-source ratings to use in media planning.